After I (more or less) finished my 1966 Volkswagen Fastback the "Volksback", it was time for another challenge, here it is!

Sold - Because I was a teenager in the 80's this reminds me of the solo debut of  Boy George after his former band "Culture Club" was history in 1987 - check out the video I found on youtube: :


But it actually means that the Volksstreaker is sold and moves on to a new home! During the Maikäfertreffen I advertised the car. There were several guys I talked to about the car, but one guy in particular was very interested and we had a long conversation, followed by a test drive and of course a hint to check out a link to this blog - which is basically the diary of the car. One day later during a long phone call a deal was struck and today was the day! The Streaker has a new owner and a long and interesting journey comes to an end! A Hazard Streaker has been on my bucket list since I was about 15 years old and a neighbors daughter had a black Hazard Streaker.
As every cloud has a silver lining - first of all I am sure the new owner is exactly the right person - and there are some funds for a future project!
Oh, did I mention about the photo session with Volkswagen Magazine during the MKT? So, maybe there will be another entry to this blog with a link to a VW website - I am already a little excited!
Eingestellt von Volkswrencher um 13:55 1 Kommentar:

The new look was an eye catcher during todays Maikäfertreffen in Hannover - I was even asked by Volkswagen magazine to participate in a photo shooting - Which I -of course- did. It was a silly and funny experience. When some pics will be posted, I will let you know!
With some initial vinyl wrap experience, I bought some yellow transparent material and converted the fog lamps: 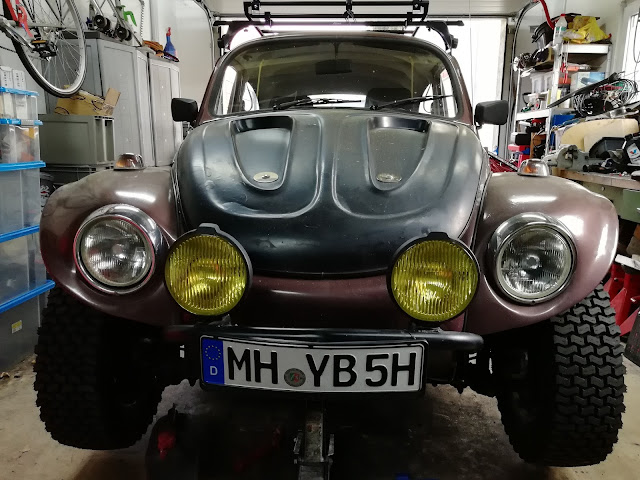 (Also note the new FEDIMA front tyres)
One of the things which always bugged me when I drove the Streaker was the lack of sound (not engine sound, but actual music), so I built a sound board with stealth speaker installation: 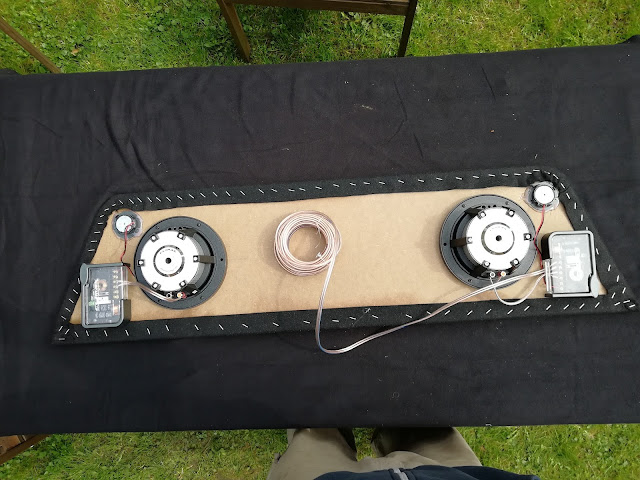 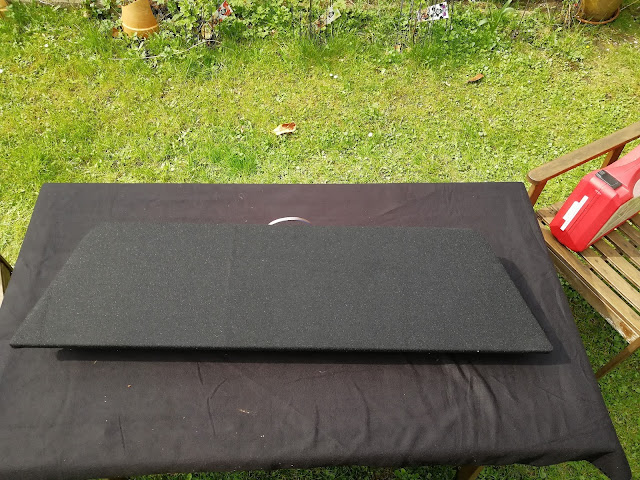 You can hardly see it on the black blanket :-)  It is installed and helped to enhance the journey to and from Hannover.
Eingestellt von Volkswrencher um 12:03 2 Kommentare:

The Streaker deserved some love, after it wasn't used much for quite some time. I wanted to fix some issues which bugged me since long. As I've learned by watching Roadkill - Making a list is always a good first step: 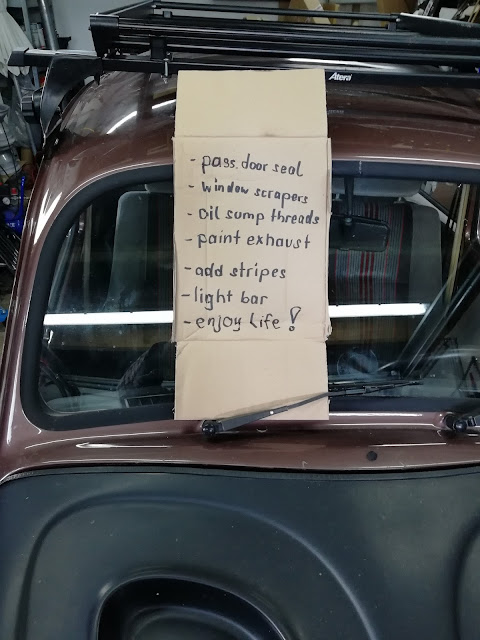 One of the problems was the rattling drop glass on the driver door, whenever it wasn't fully shut. New window scrapers had to be installed. The outer scraper is part of the chrome frame: 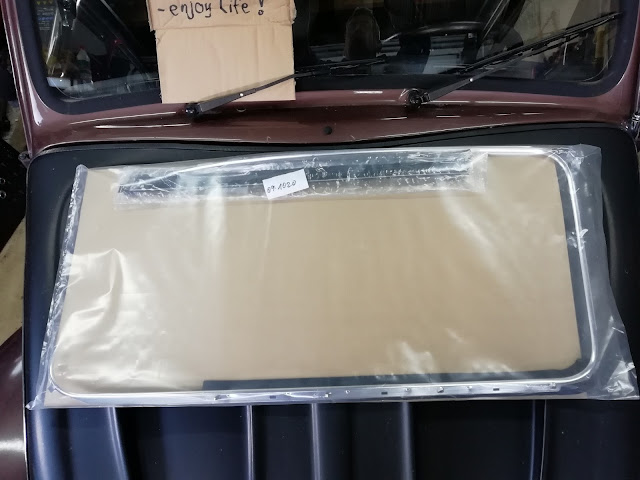 As there was another little issue on the driver door, this could be fixed at the same time:
The door card wasn't assembled properly, it bowed out on the top: 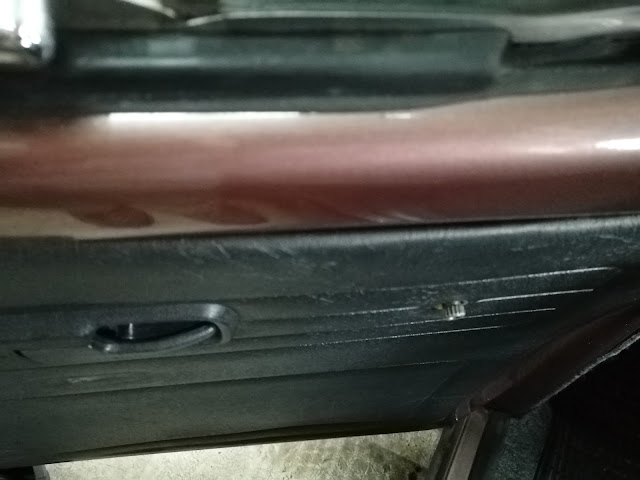 So, the whole door was disassembled and the new frame and scrapers were installed: 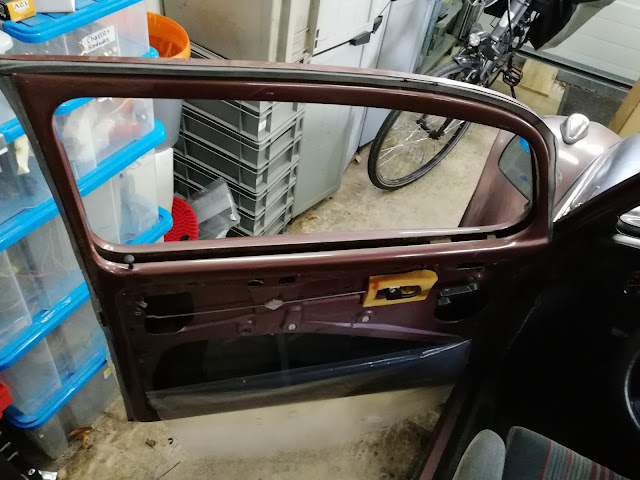 After the door was finished and the glass is now rattle free independent of the position, it was time to remove the exhaust for cleaning, de-rusting and new paint: 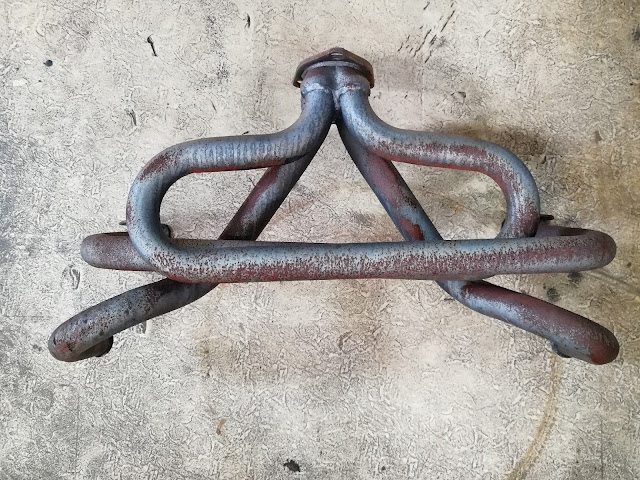 No matter which "heat resistant" paint you use, after a while, the header always looks like this...

It looks tons better, I am curious how long it will last this time: 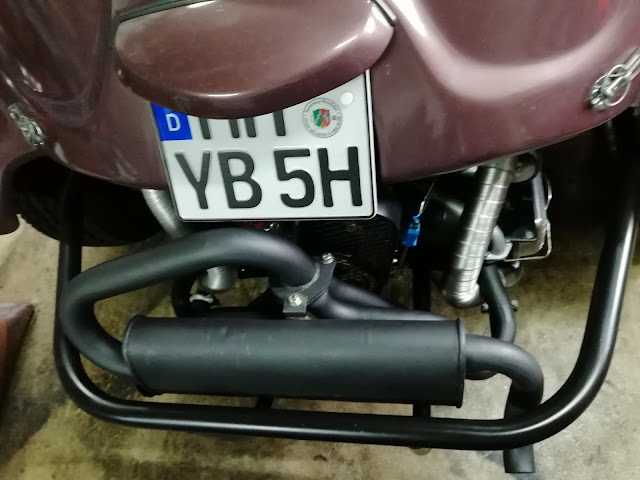 The oil sump had 2 stripped threads, which I heli-coiled (sorry, no picture) and then the stripes were added. This is the realisation of an idea which is already 2 years old, but finally I got around and made it.
This is the initial sketch of my idea and a color scheme: 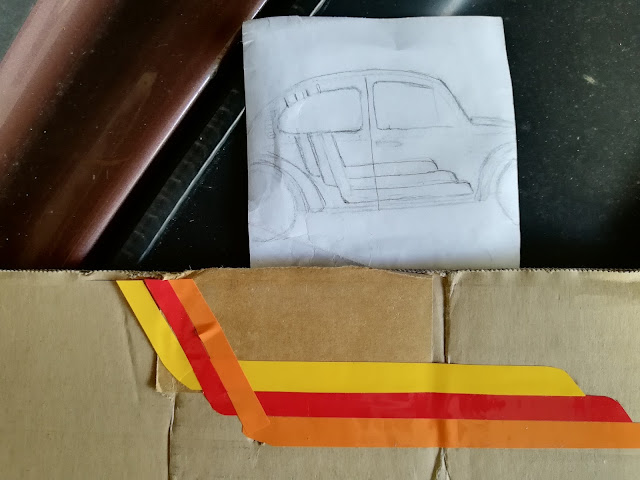 Even though it isn't exactly as shown in the sketch (because it was just a quick job with no measurements or a picture as basis, the contours are a little different between drawing and real world) I think the outcame is o.k.: 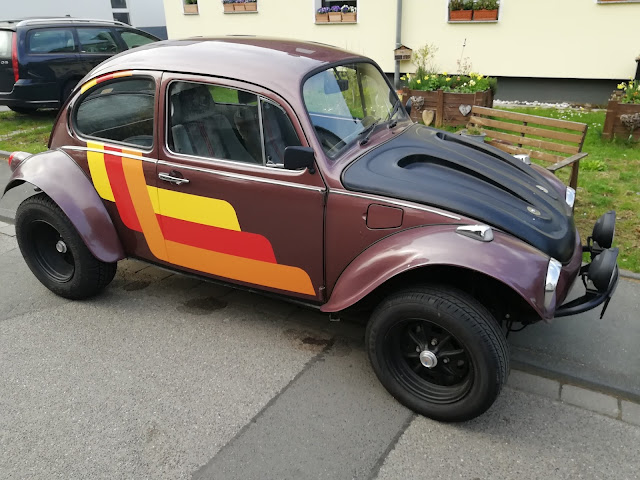 Maybe the next time the width of the stripes shall be a little smaller...

Then it was time for TÜV - it already expired in December of 2017 - 2 years after I got the Streaker back on the streets. Time just flies!
So, today I had an appointment with a positive result - 2 more years on the road! 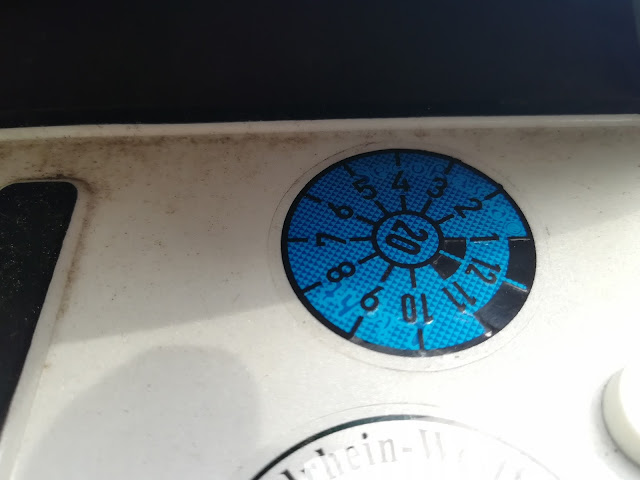 I really enjoyed driving the Streaker today, but I noticed how much I missed some music on board, so watch this space for more stuff to happen - before the 1st of May Hannover meeting! Also, the roof rack and possibly the light bar will be added soon, so stay tuned!
Eingestellt von Volkswrencher um 12:09 1 Kommentar:

As mentioned in my previous post, here is the final assembly description for the roof rack:

Brackets clamped onto the lateral beams: 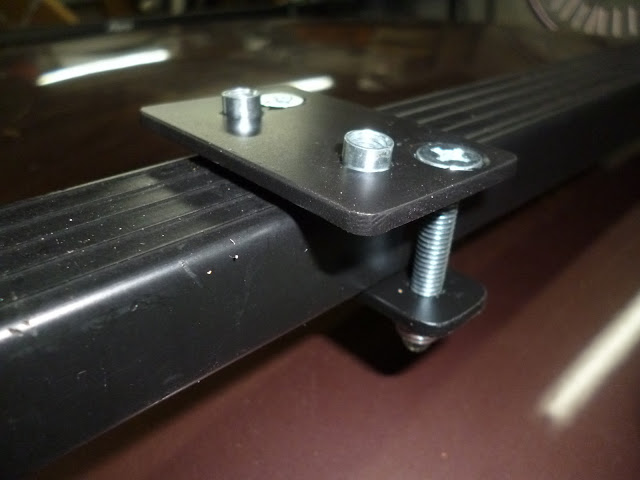 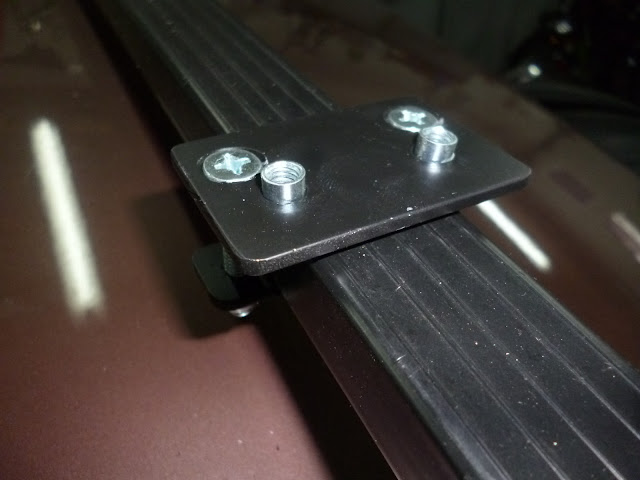 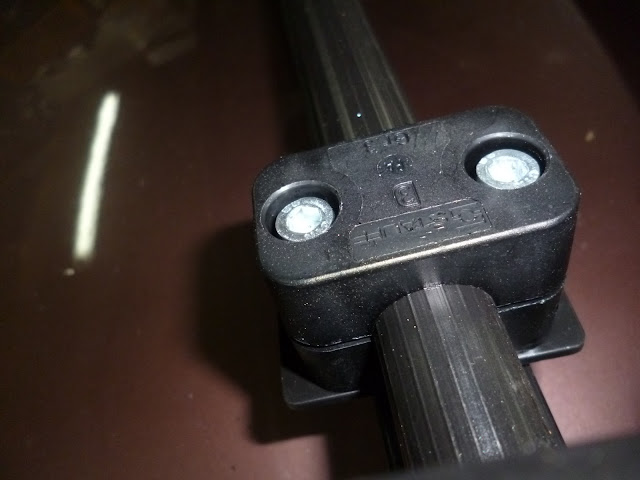 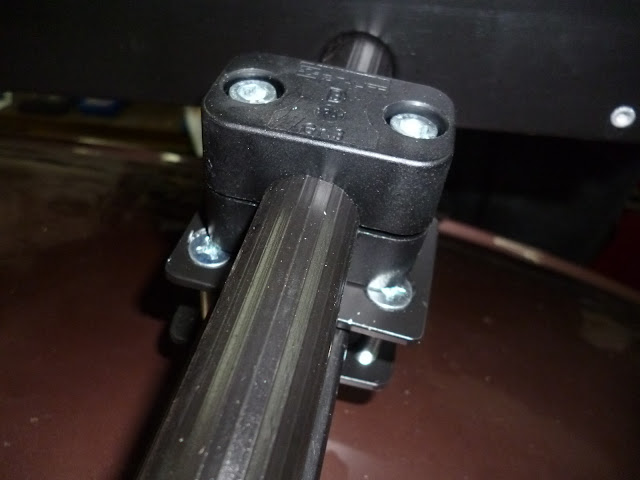 The full picture will follow later, there will be more to be seen!

A quick update, before the year is over...

The Streaker didn't receive a lot of love during this year, it just worked as expected and I used it from time to time. 2018 will be a different game, I have a lot of plans and already ordered / prepared some modifications. This will be the 1st time ever I will actually visit the Maikäfertreffen in Mai in a beetle!
The addition of a roof rack is something I planned for a long time, but now I found the lateral beams and the roof rack itself and I already designed and fabricated a sturdy fixation system: 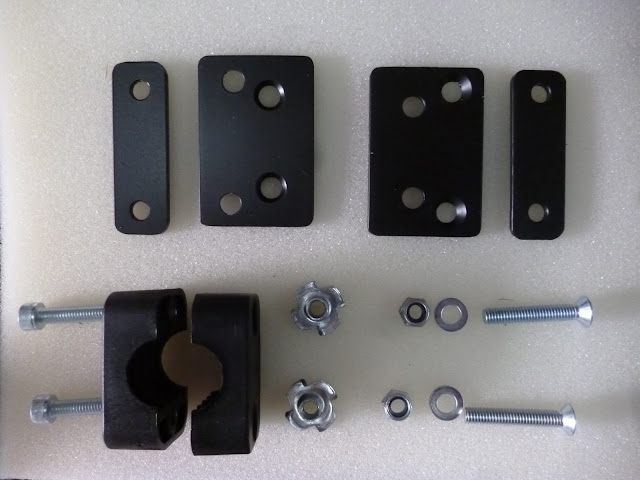 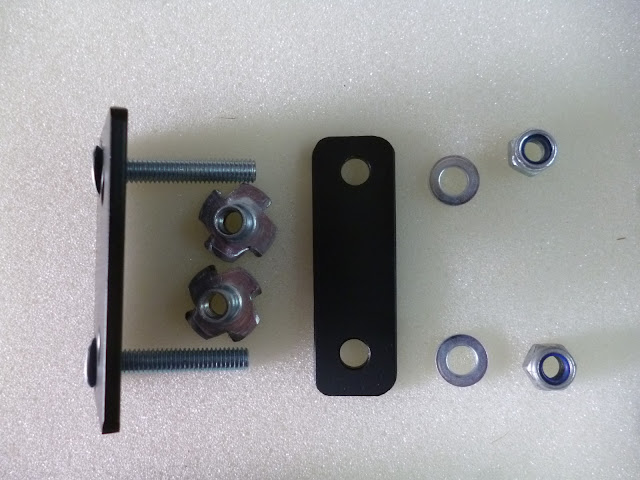 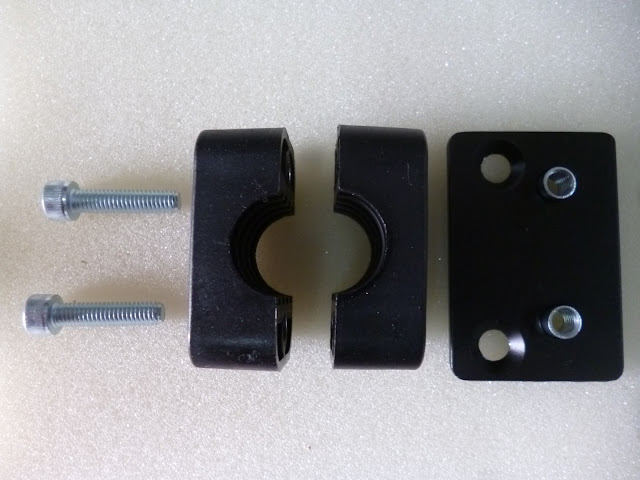 The clamps will afterwards be mounted onto the brackets, allowing the roof rack itself to rest sturdy on the Streaker.

While I was totally frustrated due to issues on the Volksback, I took some time on Sunday to finally dial the PICT  34 in. Initially, I always made a mistake during the tuning, so I messed every time. I tried it several times for the last months - but made the same mistake again and again. Another deep dive for info on the internet enlighted me and now I can say it really runs nice - finally!
Eingestellt von Volkswrencher um 12:58 Keine Kommentare:

Yesterday afternoon I started to prepare the donor beam. The tabs to attach the front bumper had to be welded on and more important, I literally flooded the whole inside of both domes with cavity wax. This beam should last forever!
As the manuals say, re-assembly in reverse order, which was a doodle with exception of inserting the leaf springs (a highlight, every time again) and I also struggled to re-install the speedometer cable! Somehow the rubber plug in the spindle didn't allow to feed the cable deep enough, then it didn't move at all. A lot of pulling and swearing resulted in this: 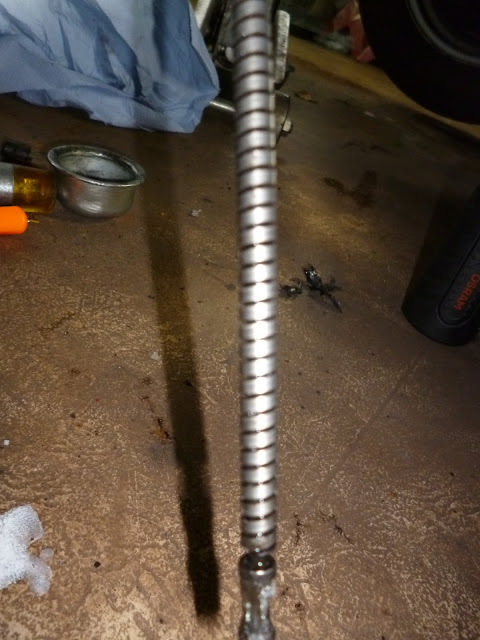 The first ~15 cm outer "skin" ripped off! Using it in this condition would result in almost instant death of the cable. Well, I always have a lot of spares in my garage, but a speedo cable isn't something you expect to need now and then. So I had to fix it. Luckily I have several rolls of heat shring tubing material in different diameters available, why not give it a try with this. It should seal in both directions, no water can ingress and no grease can egress.

Here is the cure for the cable: 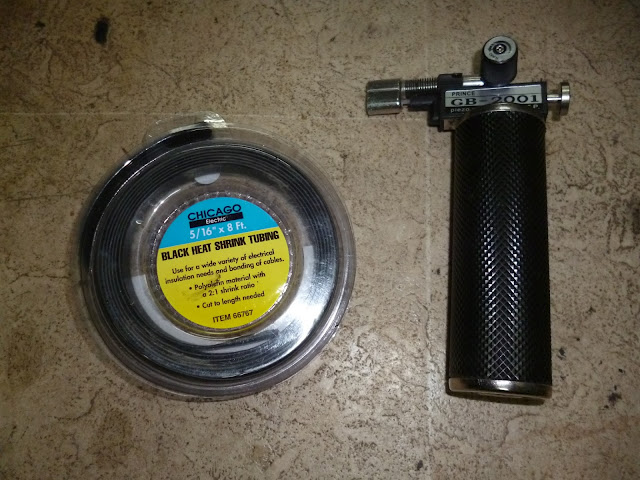 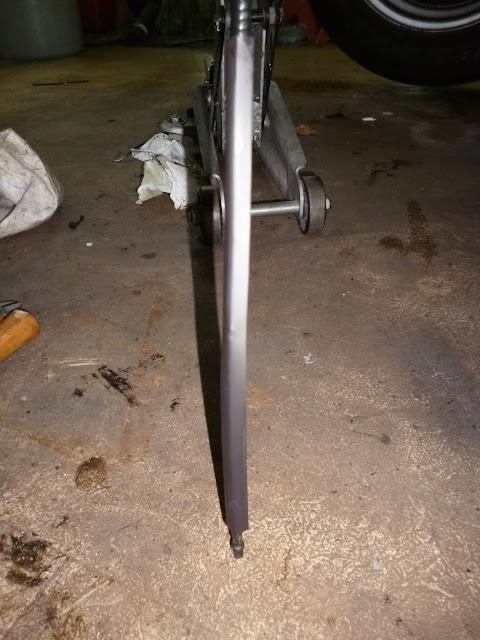 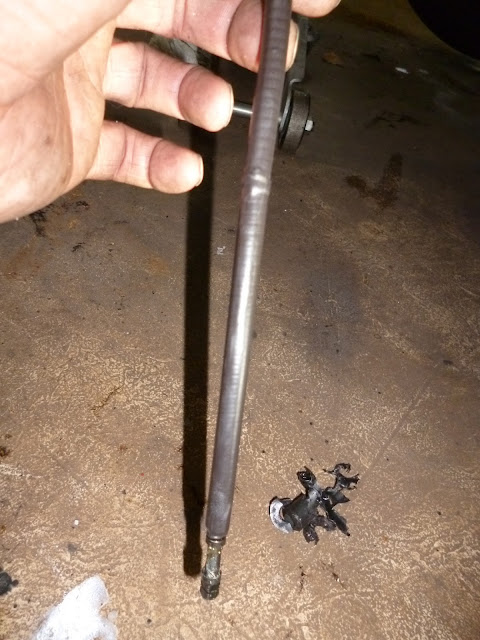 In the background you can see the remains of the rubber plug. This is something I had in my spare parts stash: 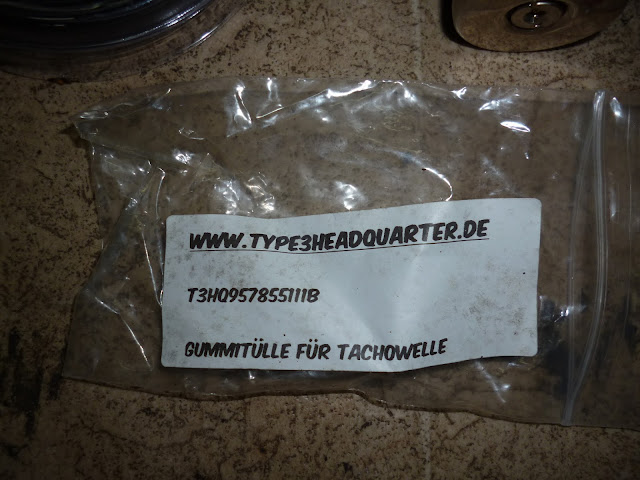 The rest was done real quick, the beam got another coat of wax from the outside, then I just checked if all screws were properly fixed, the grease nipples were used to press out any old grease and a final visual check if everything looked good. 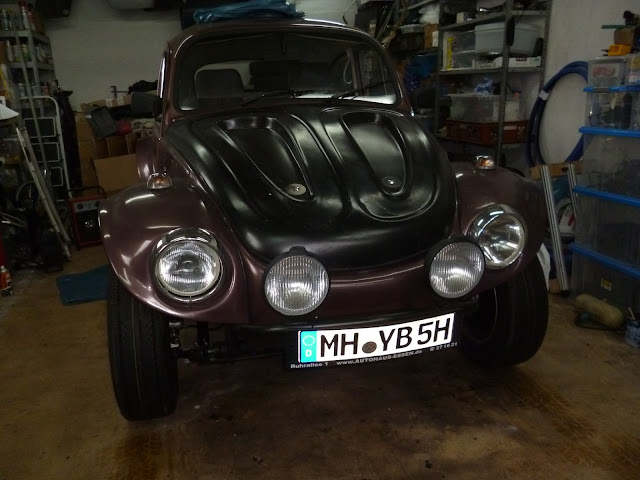 This is the result of all the work - nothing looks different than before, but now all is safe and rust free again!
On the bright side, none of the involved tools will catch any rust soon, as this was a messy, greasy affair!
Eingestellt von Volkswrencher um 03:45 Keine Kommentare: